skip to main | skip to sidebar

One of the Illustrations I've done for the 2nd children's book titled "Chicken in the Car and the Car Can't Go" written by Howard Schrager. Howard wanted to create educational fun guessing rhymes for children to guess cities with in the U.S.A.
Some times u kinda miss the small details like it was originally quoted as "He flew to the moon before the cat landed"  HE??
Darn!!I drawn a cow instead of a bull!
Course I suggested he to be a she. The lovely Author agreed:) 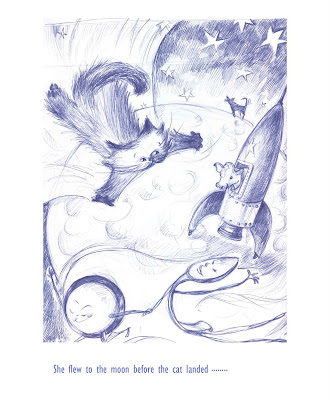 saz
Nevada, United States
I've been drawing painting since I could hold a pencil. My 'moments" are to draw from life and usually end up in a coffee shop, bar/restaurants. I'd eventually would love to be a traveling artist...sketching people in various parts of the world. I need a few lives as I have a love of Jewellery as well as Painting. Thinking towards Tiara's, fine precious enamelled pendants, brooches etc. Feedback so welcomed. Thank You all. Sarah:) www.sarahmadsen.com